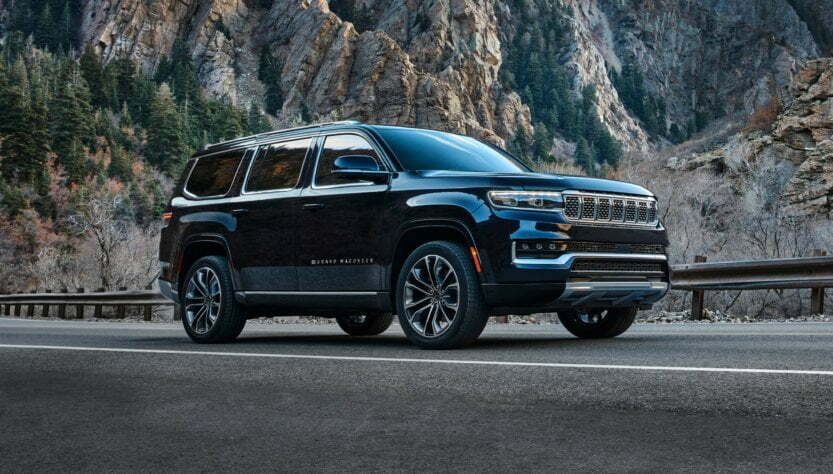 The Jeep Grand Wagoneer nameplate had been laid to rest for six years when the Lincoln Navigator was introduced in 1997 as a 1998 model.

As a result, the shortness of collective memory has led many to consider Navigator’s first American luxury SUV. This is exacerbated by the fact that Cadillac considered it enough of a threat to rush Escalade into production the following year.

Meanwhile, this trail was actually blazed by the Wagoneer. With an all-new version of that venerable model slated to bow, we thought it interesting to see how Jeep Grand Wagoneer compares to its competitors from Ford and General Motors.

A 6.4-liter V8 motivates the Grand Wagoneer. The engine is good for 471 horsepower and 455 lb-ft of torque. An eight-speed automatic transmission routes power to all four wheels.

Meanwhile, Escalade gets a 420-horsepower 6.2-liter V8 with 460 lb-ft of torque and a 10-speed automatic transmission. The Escalade gets four-wheel drive as well.

Conversely, the Lincoln Navigator goes with finesse over brute force in that it employs a turbocharged V6 engine, which makes 450 horsepower, but an eye-opening 510 ft-lbs of torque. Navigator also has a 10-speed automatic transmission and four-wheel drive.

Proving there’s no real substitute for cubic inches, the Jeep Grand Wagoneer is the towing champion among the three, with a 9,860-pound rating. Escalade is good for 8,200 pounds, while Navigator is rated to pull 9,300 pounds. Interestingly, if you opt for the shorter-wheelbase Wagoneer and its 5.7-liter V8, you’ll get a towing capacity of 10,000 pounds.

While Navigator and Escalade also offer four-wheel drive systems, both vehicles are designed to shine on the pavement. Meanwhile, the Grand Wagoneer must live up to Jeep’s rep of being able to deal with the rigors of one of the most rugged byways in North America, California’s Rubicon Trail in the mountain range known as the Sierra Nevada.

Granted, you do have to get the off-road package to obtain that capability, but it’s available nonetheless. The same cannot be said of the Cadillac and Lincoln. The bundle includes all-terrain tires and a two-speed transfer case with a low range for crawling over boulders and such. Height adjustable suspension gives the trail-ready Wagoneer 10 inches of ground clearance, while a strategically placed array of skid plates protects the Jeep’s delicate under-bits.

As is to be expected, all three vehicles are paragons of contemporary luxe. However, the Grand Wagoneer tops Navigator and Escalade on the audio front with a 1,375-watt audio system powered by one of the most respected names in high-end audio – McIntosh. The system contains 23 speakers, one of which is a house quake-inducing 12-inch subwoofer.

Wagoneer also offers five years of maintenance, along with a personal concierge. (For the uninitiated, that’s someone upon whom you can call, so you don’t have to sweat the small stuff.) Moreover, specially trained sales personnel attend to Wagoneer customers. These people have been subjected to a rigorous 90-hour training course to ensure your every question gets an accurate response.

The Grand Wagoneer’s base price is $87,590. Escalade ESV starts at $80,840, while the long wheelbase Navigator starts at $85,715. Fully loaded, each of these vehicles can easily break the six-figure mark. And frankly, a couple of thousand dollars here and there isn’t really a deal breaker once you’re in this territory. So ultimately, when it comes to how the Jeep Grand Wagoneer compares to its competitors, the answer is — quite favorably.